Five years after opening 16 Lots Brewing Company in Mason, Ohio, founder and CEO Michael Burton, in partnership with co-owners Del Hall and Erich Streckfuss, is expanding the concept to Newport on the Levee, the family entertainment destination overlooking the ‘Ohio. River and downtown Cincinnati.

The trio have spent the past two years developing the globally-inspired brewery and plan to launch their 16 Lots Southern Outpost near the future Amador Cuban restaurant and bar over the holidays.

A seasoned professional in the marketing and general management of consumer packaged goods, Burton has a 21-year career in business, including at Procter & Gamble, Johnson & Johnson, Spectrum Brands and Sunny Delight. He also holds a Bachelor of Science in Industrial Management from the prestigious Carnegie Mellon University. Burton conceptualized 16 lots in 2016 and opened the original location in Mason in the fall of 2017. A tribute to the town’s founder, the namesake behind 16 lots refers to the infamous plot of land purchased by the Major William Mason after the Revolutionary War, which later blossomed in Mason’s heart.

In 2020, Hall joined Burton as co-owner and chief commercial officer of 16 Lots with a vision to bring the brand to Cincinnati’s backyard. A veteran of the U.S. Army, Hall graduated top of his class and used his GI Bill and VA benefits to earn a bachelor’s degree in business administration from Ohio State University before leaving the military in 2005. After a successful career in real estate and construction, Hall then pursued his passion for craft beer and became the Southern Ohio Sales Manager for Premium Beverage Supply, Ohio’s largest craft beer distributor. . Prior to joining 16 Lots, he also held the position of Sales Manager at Fifty West. Hall is now known as SgtDel, the Real American Beer-O and the Ohio Beer Fasting Man.

“The Levee is kind of an institution; it’s been around forever and with investments from North American Properties, it’s experiencing a resurgence and helping to drive much-needed growth in the region,” Hall said. “The city of Newport is truly experiencing tremendous momentum and it’s so cool to enter this rapidly changing market in such an iconic location.”

Dedicated to the exploration of beer, romance and knowledge, the southern outpost of 16 Lots will be a respite from the everyday world. The 7,700 square foot nautical-themed space will feature travel-related design elements such as maps, globes, flags and artifacts from various cultures. Furnishings and accessories in rich leather, steel, iron, stone and wood will also adorn the interiors.

A 2,000 square foot outdoor patio, concert hall, full-service restaurant, and cigar lounge are also in the works for the southern outpost. Craft beer and cocktails, adult slushies and sophisticated gourmet dishes will be served during lunch and dinner. Streckfuss, the former head brewer of Moerlein Lager House, will serve as Levee’s brewmaster and oversee all brewing operations.

16 Lots will join an ever-growing collection of entertainment options at Levee, including the recently opened Velocity Esports, Rotolo Bowling and Newport Aquarium. In addition to new offerings, Brothers Bar and Grill is currently undergoing renovations. Modern upgrades were made to the restaurant’s interior last month, and the outdoor patio is now getting a facelift to better accommodate diners. 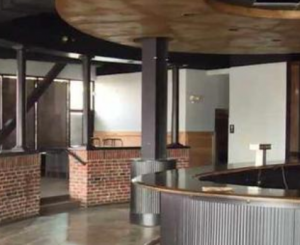 “We are thrilled to have 16 lots as the next addition to the river walk, which will provide another place for the community to come and have a meal together, have a drink and take in the beautiful skyline views,” said Regan Thomas, Leasing Associate at North American Properties (NAP).

The Levee is approaching its first anniversary since NAP completed the multimillion-dollar redevelopment of the 21-year-old mixed-use destination, which transformed the underutilized asset into a walkable waterfront community and improved the overall guest experience by adding hospitality -targeted services such as Concierge. In 2021, the Levee was named the NAIOP Cincinnati Retail/Mixed-Use/Hospitality Deal of the Year and received the ImageMaker Award from the Northern Kentucky Chamber of Commerce.

With the addition of Bridgeview Box Park, The Plaza and the reimagined Gallery, the Levee has once again become a place of entertainment for locals and visitors alike. This year, the Levee is hosting its largest and most consistent calendar of events yet, with over 100 community activations scheduled over the holidays.