Boulder, Colorado • July 27, 2015— The craft brewing industry continued its strong growth in the first half of 2015, according to new semi-annual data released by the Brewers Association (BA), the nonprofit trade association dedicated to small independent American artisans. brewers1. US craft beer production volume increased 16% in the first half of the year.

“Industry growth is occurring in all regions and coming from a mix of sources, including diverse retail environments and a variety of unique brewery business models,” said Bart Watson, Chief Economist, Brewers Association. “The continued growth of small independent brewers shows that additional market opportunities and demand are widespread, although competition in the sector is certainly growing and the need for brewers to differentiate themselves and produce high quality beer from world class is more important than ever.”

As of June 30, 2015, 3,739 breweries were in operation in the United States, an increase of 699 breweries over the same period a year earlier. Additionally, there were 1,755 breweries in planning. Craft brewers currently employ approximately 115,469 full-time and part-time workers, many of whom are manufacturing jobs, contributing significantly to the US economy. 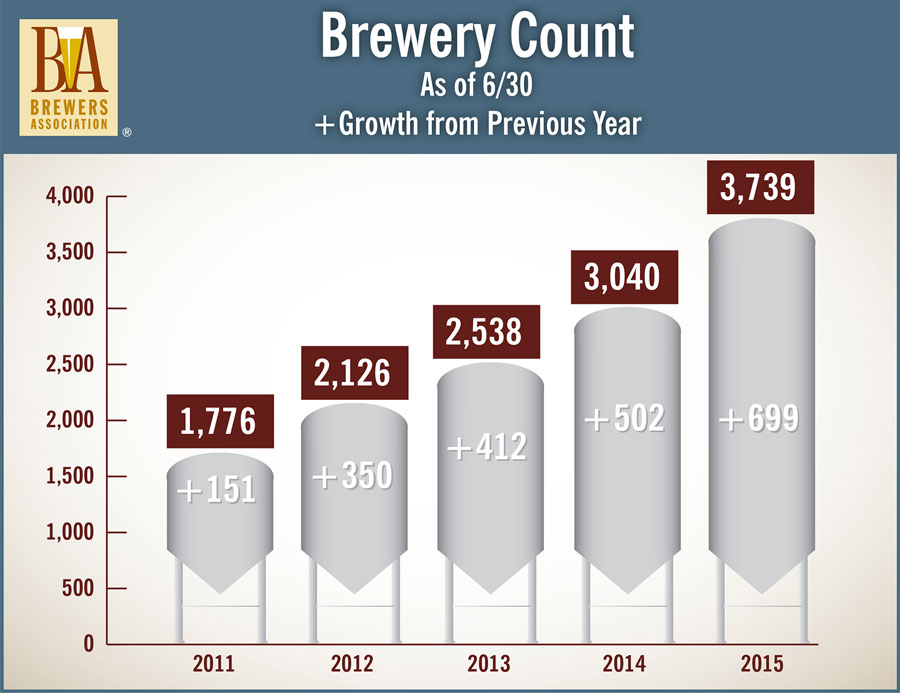 “More and more Americans are discovering the joys of enjoying a fresh beer produced by their neighborhood brewery. By supporting local, small, independent craft breweries, beer lovers are gradually returning the United States to the system of localized beer production that has existed for much of our country’s history,” added Watson.

1 Definition of a Craft Brewer: An American craft brewer is small, independent and traditional. Small: Annual production of 6 million barrels of beer or less (about 3% of annual sales in the United States). Beer production is attributed to the rules of alternate ownership. Independent: less than 25% of the craft brewer is owned or controlled (or an equivalent economic interest) by a member of the beverage alcohol industry who is not themselves a craft brewer. Traditional: A brewer whose majority of total beverage alcohol volume comes from beers whose flavor comes from traditional or innovative brewing ingredients and their fermentation. Flavored malt beverages (FMB) are not considered beers.

The Brewers Association is the nonprofit trade association dedicated to America’s small, independent brewers, their beers, and the community of brewing enthusiasts. The Brewers Association (BA) represents over 70% of the brewing industry and its members make over 99% of the beer brewed in the United States. The BA organizes events, including the beer world cup®, Great American Oktoberfest®, Craft Brewers Conference and BrewExpo America®, SAVOUR℠: An American Craft Beer and Dining Experience, AHA National Homebrew Conference, National Homebrew Competition and American Craft Beer Week®. The BA publishes The new brewer magazine and its Brewers publications is the largest publisher of contemporary brewing literature relevant to today’s craft brewers and home brewers.

Beer lovers are invited to learn more about the vibrant world of craft beer at CraftBeer.com and on homebrewing via BAs American Homebrew Association. follow us on Twitter.

The brewers association celebrates the year of the beer

2018 Year of Craft Beer Highlighted by Number of Landmark Breweries and Economic Impact Boulder, Colorado. – As craft brewers continue to make waves in an evolving market, the Brewers Association – the non-profit trade association dedicated to small independent American brewers – examined the contributions, highlights and defining moments of the beer from the […]