While Krebsbach and Paulman stayed until Tallgrass suspended operations in mid-2018, Voegeli left in 2016 to work for Standard Beverage, then became the Midwest representative for Ska Brewing in Durango.

“Garrett and Adam approached me to come and start a brewery with them,” Voegeli says of the brewery’s genesis when we speak on the phone. “

Voegeli is in charge of sales and marketing for Manhattan Brewing Company, while Krebsach and Paulman are the brewers. They opened on July 8, 2020, a time that is not particularly opportune for a company, but especially for a brewery that forces people to come and try the product. It wasn’t by choice, says Voegeli.

“We were halfway through construction when it all hit,” he continues. We started construction in December 2019, so everything back then was like–COVID, who knows what it might have been like then.

Voegeli and his co-owners were in Wichita working with Central Standard Brewing when it all started getting canceled. First it was the Big 12 Tournament, then the NCAA Basketball Tournament.

“We were like, ‘Oh shit, this could be a real thing,'” Voegeli says. “But at that point, we were halfway there and we were like, ‘Well, we can’t just stop it. We must continue.

And they did, and ahead of schedule. Manhattan Brewing wasn’t supposed to open until September 2020. Construction was supposed to be finished in August and then they could start brewing. However, due to Covid, construction workers were pulled from other jobs and, in the interest of keeping them on the job, they were reassigned to other jobs, allowing Manhattan Brewing to open earlier. provided that.

“We ended up getting the keys to this place in early June and then opened on July 8,” says Voegeli. “It was crazy to open up when we did, but because of that, we saved a lot of money during construction by doing some things ourselves.”

In addition to opening a few months earlier than planned, the owners of the brewery had to change direction. The first thing they did was buy a canning line, as they weren’t sure the business would eventually close. This allowed Manhattan Brewing to immediately begin distributing its product in Manhattan.

“Fortunately, we were never completely closed,” Voegeli explains with relief. “We were still at 50% capacity, but since we were already distributing and getting that extra revenue, we just expanded and added three more tanks to distribute a little more in Kansas. We opened Wichita because it’s a bit of an easier market for us. I’m from Wichita and I know everyone there.

It is rare for a brewery to start distributing a new product immediately. The usual modus operandi is to start small, selling from your own tasting room, allowing the brewery to grow a following through tastes and word of mouth, but Manhattan Brewing has gone beyond that. Luckily, it was a hit, even though it wasn’t in the original launch plans.

“The cast was so far for us,” laughs Voegeli. “First, you don’t make that much money on it, so we didn’t want to do distribution for at least five years. We wanted to establish ourselves – to retain people in Manhattan who came for football and basketball games. The K-Staters get that loyalty from Manhattan Brewing.

As he explains, he and his partners knew that as a young brewery, they had to build loyalty before they grew. Yet again, because of the pandemic, they needed to get their beer out and into people’s hands. As they had the capacity to produce at this level, they launched themselves, with a somewhat positive balance sheet, despite the circumstances that led to it.

“One of the interesting things about the pandemic — and there aren’t many — was that the loyalty that we wanted from Manhattan seemed to pick up a little bit more,” Voegeli says. Especially since people weren’t traveling and had nowhere to go. “They wanted to support the locals like crazy. They immediately latched onto us and kept us going.

From my personal experience, I felt like people were fine with trying new beers during the height of the lockdown. If you couldn’t hit the bar, why not spend the $5 you’d drop on a standard draft beer on a night out on good craft beer? Voegeli agrees it worked to benefit Manhattan Brewing.

“It helped because a lot of people didn’t want to come and sit down for a beer, so they would go to the fridge here and just grab a four-pack of local stuff,” he continues. “Again they wanted to support the locals and try us out which helped a lot.”

The brewery started out with five beers: Peach Wheat, a West Coast IPA, American Wheat brewed with Citra Hops, a Lemon Saison, and a Mild English that ended up being as strong as a strong ale. British. Since then, they’ve changed things up quite a bit, including a recent collaboration with Ska Brewing called 2 Tone IPA, which marks their expansion outside of Manhattan and Wichita to encompass Kansas. 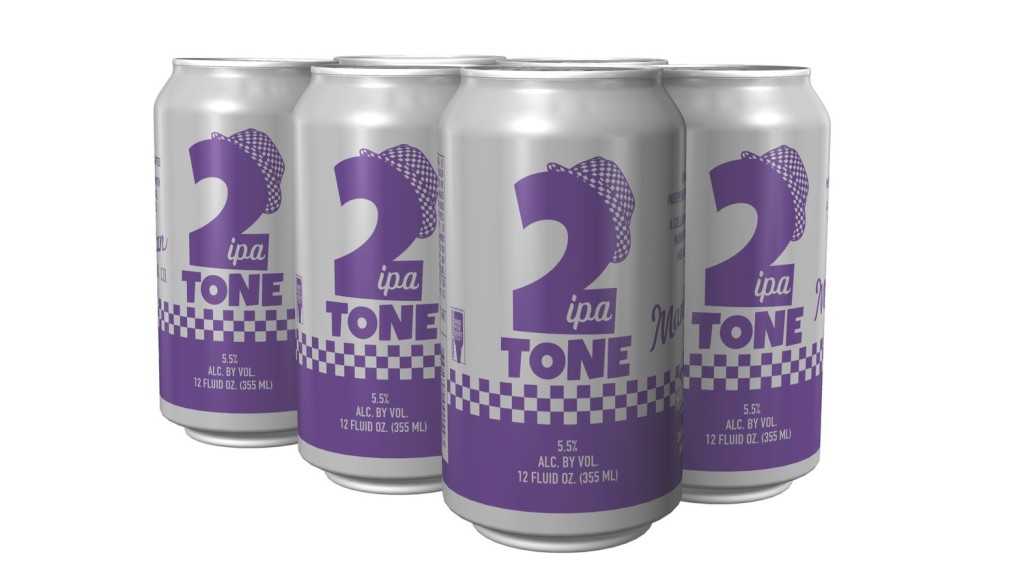 Originally, plans for the 2 Tone collaboration weren’t as big as they ended up being, with launch parties all over Kansas. It was just supposed to be a small batch that would be available at the brewery itself.

“Ska people were like, ‘Why not make a bigger batch of it and sell it all over Kansas?'” Voegeli recalled. “They asked me if we’d be okay with that and I was like, ‘Yeah, that would be great.'”

It’s pretty awesome, actually. The collaboration is a tasty, hoppy beer with enough flavor to make it interesting yet light enough in body and ABV to make it one where you’ll want a second by the time you’re halfway through your first pint.

“Our philosophy on beer and Ska’s philosophy on beer, they line up perfectly,” says Voegeli. “They don’t like chasing trends so much. They’re a little slower at trends sometimes, but man, they just want to make good beers that they like to drink, and we’re on par here. We make New England IPAs, we make sours – we do that kind of stuff – but our main focus is crisp, clean beers and just good classic beers.

To make it clear how simpatico the two breweries are, Voegeli says that when they developed the recipe for the IPA 2 Tone, it took them two emails to figure out what they wanted to do.

“We had so much fun making this beer,” Voegeli says as we end our call.

“The fact that Ska, a 27-year-old company in September, even thought of collaborating with a small little brewery in Manhattan, Kansas – even though I worked for them – makes us blush every time. It blew us away. This whole process was so cool for us, that we were so grateful to be part of it.

Space City is getting an astronaut-themed brewery just north of downtown this fall. Beer veterans Chris Fall and Craig “Rocky” Keener will launch Bad Astronaut Brewing Company in the Hardy Yards neighborhood, transforming a 30,000 square foot warehouse at 1519 Fulton Street into a faucet room, indoor beer garden and a playground, with plenty of […]

The brewery pays tribute to the owner’s father who died while battling dementia. NEW MILFORD, Conn. – Housatonic River Brewing in New Milford is a great place to add to your winter bucket list and help a good cause at the same time! The team brews a brand new beer called “Forget Me Not”. All […]

MONTAUK, New York – On June 30, 2012, Montauk Brewing Company’s first keg was loaded onto a small cargo trailer attached to a seatpost of a beach cruiser by three friends who had just opened the easternmost brewery in New York. This barrel was cycled to the Harvest Restaurant just up the […]