Most of the data reported in the media on beer comes from the outside. This makes sense for several reasons. First, offsite accounts for over 80% of total beer volume. Second, the data is easier to obtain, thanks to the magic of barcodes and sophisticated scanner systems. Onsite data exists, but POS systems are generally less reliable than scanners, and onsite are less concentrated, making data collection more difficult.

The lack of comprehensive on-site data creates particular challenges for craft brewers in understanding the market, with around 35% of craft volume coming from on-site channels. These challenges are particularly acute for smaller brewers. Breweries under 1,000 barrels have 95% production draft (median of 99%), and brewers producing under 1,000 barrels have an average of 89% draft (median of 100%). Overall, the median brewery surveyed in our 2014 benchmarking survey had a draft production of 78%.

So without comprehensive onsite data, what clues can we take from other data sources about the onsite market, its future, and what it means for craft brewers?

The first point is that the size of the onsite beer market varies wildly from state to state. This is due to a variety of factors: the share of beer in alcoholic beverages, overall beer consumption levels, number of onsite outlets, onsite culture, consumer preferences, and socioeconomic factors. economic. Below is a graph of the total draft beer market by state in 2013 (from the Beer Institute) measured in pints per adult 21 and older.

As you can see, the variations are pretty huge, ranging from almost 44 pints per adult 21 and older in Colorado to 5.5 pints per adult 21 and older in Mississippi. Given the low barrier to entry for many onsite brewers, this immediately suggests a clear factor of varying levels of breweries per capita, onsite market size. To see this visually, here is a graph of the number of craft breweries per capita in 2015 and pints per capita in 2013 (latest year available).

Importance of on-site for craftsmanship

The importance of on-site for craft brewers does not stop there. There is also evidence that the old maxim, “brands are built on site”, has been true on the whole for craftsmanship. The data suggests that in states where onsite is more important to the beer market, craft is doing better offsite. The logic is quite simple: in places where more beer lovers in bars and restaurants drink beer and therefore encounter craft, off-site venues also have better sales for craft brewers. . 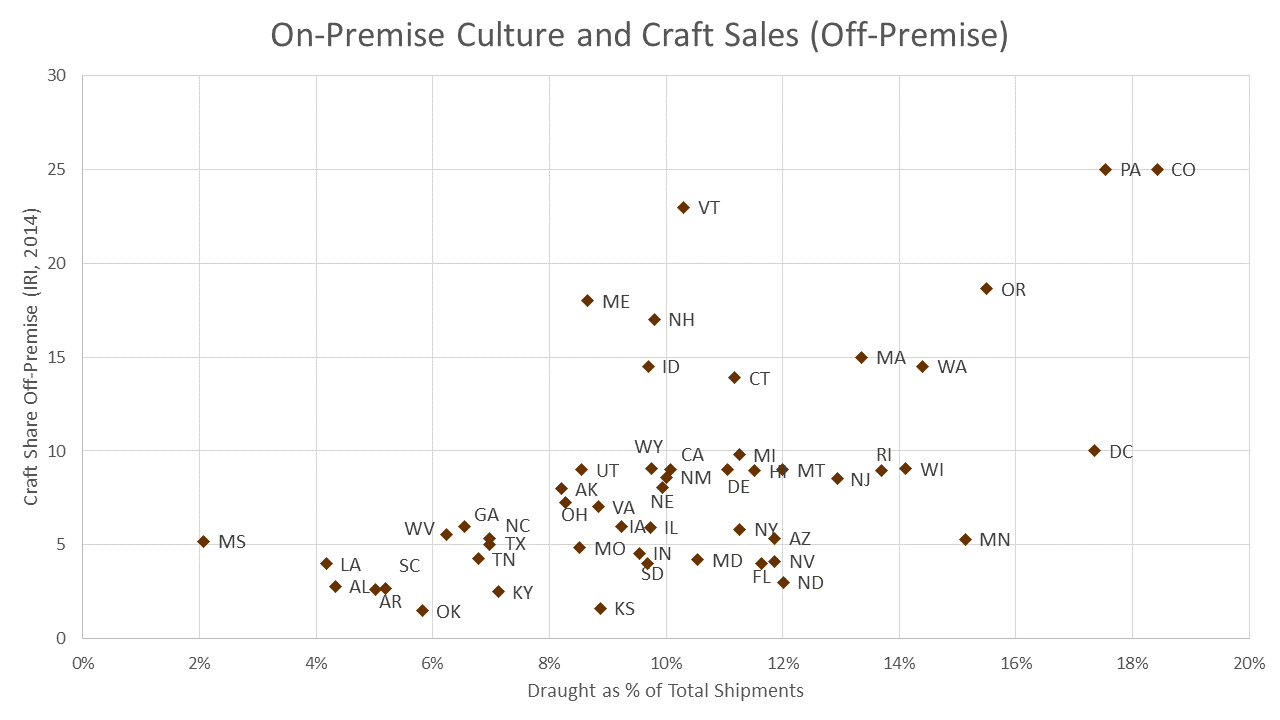 In conclusion, it will be interesting to see how these dynamics unfold in the future. The on-premises market has changed over the past few years, with the continued spread of “rotation nation” and an increasingly fractured and competitive market for faucet handles. While this varies from brewer to brewer, it has likely created challenges for regional craft brewers, companies that typically do the heavy lifting in offsite channels. Given the greater dominance of chains in offsite markets, these chains will likely never achieve the diversity we see in onsite markets. Given these different dynamics, it begs the question of whether the historical avenues for growth will still exist, or whether we will see more regional craft brewers building their brands via offsite.

June 19: In this section of the Craft Brewers Guide to Cultural Celebrationsyou’ll find a brief history of Juneteenth, a set of considerations to help you avoid common missteps, suggestions and recommendations for your Juneteenth commemoration or celebration, and a set of useful links. Juneteenth provides a great opportunity for craft brewers to foster authentic […]

Programs CraftBeer.com is the Brewers Association’s award-winning website that captivates and educates beer lovers. CraftBeer.com’s mission is to tell stories about the people who make the heart of small independent brewing beat faster and the cities and businesses that support them. The website is entirely dedicated to independent American breweries. When it comes to marketing […]

Bergenbier GM elected president of the Romanian Association of Brewers